Review: Thinking Cap Theatre gives 'The Emperor of the Moon' a dose of lunacy

To remedy that with the Restoration comedy “The Emperor of the Moon,” running through June 3 in Fort Lauderdale, Thinking Cap Theatre has seemingly thrown everything in its arsenal at that challenge. There are sly references to “Star Trek,” “Lord of the Rings,” “Jeopardy” and Michael Jackson’s moonwalk. Snatches of songs such as Creedence Clearwater Revival’s “Bad Moon Rising,” Van Morrison’s “Moondance” and Frank Sinatra’s “Fly Me to the Moon” are reimagined as 17th century ditties. And there’s enough slapstick (including a literal slap stick) to shame the Three Stooges. Director and costume designer Nicole Stodard couldn’t stick more shtick in this farce if she wanted to.

It all goes a long way to making the language — with all its “Pray thee,” “I am undone,” “Faith, no” “Oh bless” and “Methinks” — less impenetrable. The cast handles the comic patter, impressive mostly for its sheer barrage than for its actual humor, with as much skill and panache as could be hoped for.

Written by Aphra Behn, considered to be the first professional female playwright, “The Emperor of the Moon” is notable for incorporating most of the hot theater trends of its day. Music and dance are featured, giving the play what could be considered a protomusical element. The structure borrows much from the commedia dell’arte theatric form, with its wild and wacky take on topical fare and shrill irreverence wrapped around stock characters that would have been easily recognizable to a 17th century audience. Behn also inserted another obsession of the day: astronomy and natural science. 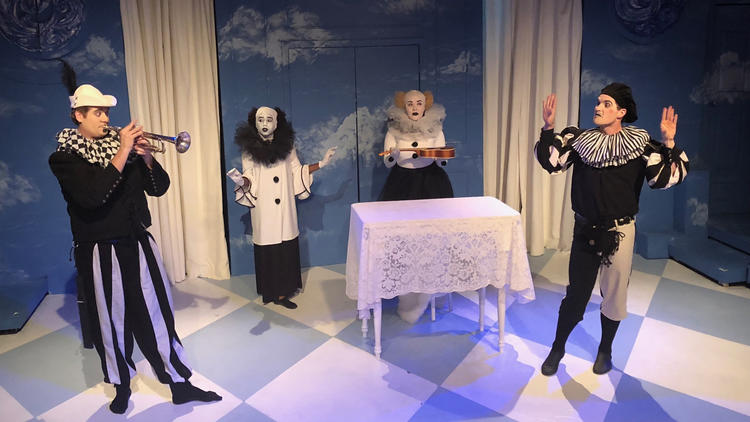 A scene from Thinking Cap Theatre's "The Emperor of the Moon," running through June 3 at the Vanguard in Fort Lauderdale. (Nicole Stodard / Courtesy)

The central story is about wealthy scientist Doctor Baliardo (Michael Gioia), who fancies himself an astronomer and is convinced there is a kingdom on the moon. Under his charge are his daughter Elaria (Leah Sessa) and niece Bellamante (Jeanine Gangloff Levy), both of whom would like to marry Don Charmante (Carlos Alayeto) and Don Cinthio (Stephen Hedger). But the doctor would rather marry off the ladies to men from the moon, whom he deems far superior. So the ladies have to meet with their earthling men in secret, with the help of servants Harlequin (Timothy Mark Davis) and Scaramouch (Clay Cartland), both of whom are rivals for the maid Mopsophil (Casey Dressler). As with a farce of that time, there are mistaken identities, duels, wordplay, boudoir bawdiness and lightning-quick entrances and exits.

Got it? Good. Hold on to that as the show flies off for lengthy and somewhat wobbly stretches just for laughs — fine for the late 1600s but tiresome today. What holds it together is Cartland’s wild-eyed sparkle, which is equal parts Mel Brooks and Bugs Bunny.

Despite the infusion of Looney Tunes lunacy, the play’s humor still has an academic feel. And clocking in at three hours, including a 15-minute intermission, doesn’t exactly help matters. Theater fans will be entranced. Casual theatergoers not so much.

Greenway See the Difference Commercial- Check it Out!

She Shorts a Hit!