The Christmas season officially opened this weekend wrapped in pink.

Elle Woods, leading a perky singing and dancing ensemble in Slow Burn Theatre Company’s ebullient Legally Blonde, lit up the Broward Center with a positive attitude that probably allows that Santa Claus might yet exist.

Once again, the Delta Nu from Malibu with a 4.0 GPA in fashion merchandising, skewers the expectations of stereotyping naysayers in a cute and entertaining tale of self-empowerment.

One of the 2007 musical’s strengths, like the 2001 film, is that while it unabashedly has morals to preach, it believes in them completely, rather than simply injecting them off a checklist like so many Disney movies.

Director-choreographer Patrick Fitzwater has clearly worked very hard with his cast and creative team, but his most effective move was hiring Becca Andrews, a gorgeous vivacious talent who sparkles like tinsel and propels the entire evening – although she has able supporting help.

Legally Blonde is a wryly funny tale that not just embraces but celebrates the co-existence of the material girl world with that of romance and achievement. The movie, based on a novel, benefited immeasurably from its star Reese Witherspoon but the subsequent stage versions have discovered that solid actresses with charisma such as Laura Bell Bundy can nail the role as well.

The story follows sorority girl Elle, jilted by her social climbing beau Warner who is en route to Harvard Law and feels she is not sophisticated and patrician for his planned future. Encouraged by her trio of friends and armed with her Chihuahua, Bruiser, she studies for the LSAT to follow him to Ivy League enrollment solely to win him back. Hard studying, a moratorium on partying and an application essay that takes the form of a cheerleading production number gets her in. While she is a fish out of water, she persists. Warner is engaged to upper-crust fellow student Vivienne. But beauty salon owner Paulette provides moral support along with an invisible Greek chorus of Elle’s sorority sisters and a teaching assistant Emmett. She gets chosen by the abusive Kingfield-wannabe Professor Callahan to help defend fitness guru Brooke in a murder trial. And things develop from there.

The script by Heather Hach (co-writer of the screenplay for the 2003 remake of Freaky Friday) is a pretty decent recap of the movie plot, although like 98 percent of musicals made from movies, plot points are ticked off with little time for exploration because they have to make room for the songs. See the movie first. But she has some cute lines such as a note back home that observes, “All the kids here have different noses.”

The music and lyrics by Laurence O’Keefe (Bat Boy and Heathers) and Nell Benjamin (Mean Girls the musical) are peppy, cheery and a bit off-beat. It may have been the sound mix opening night, but a lot of musical lines seemed to end up flat or end off somewhere that did not match the rest of the notes.

or the musical courtroom debate on whether a witness is “Gay or European.” Some moments don’t work as well: When Elle is tricked into appearing in a Playboy Bunny costumed at a party, neither the crowd nor she reacts much to the faux pas for more than a milli-second.

But the show has some smart grace notes if you’re watching closely. In the first law school class scene, everyone opens up a laptop except Elle. She takes out a pink notebook and pulls out a pen with a pink feathered top.

One thing that nagged this critic but few others in the audience is something that seemed lacking here but was prominent in the film and in the national tour. In those versions, Elle came across initially as a charming but shallow, lovable but ditzy material-obsessed Valley Girl. In fact, she was none of those things and the audience’s discovery of their own stereotyping was a crucial way that the show’s message was underscored. And to a degree, Elle in those versions had undersold herself and her arc over the evening was one of self-discovery of her own worth. This Elle starts and ends as a demonstrably capable, self-assured being whose only real discovery is that she doesn’t need validation from a louse like Warner. 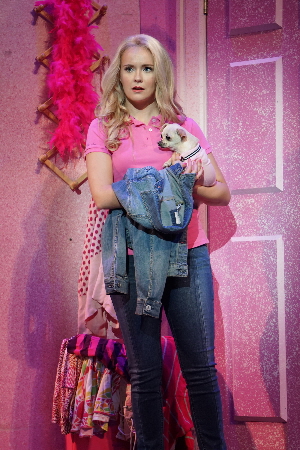 Andrews is the real discovery here. New York-based but with extensive credits in regions like St. Louis, she just inhabits Elle without the slightest wink. She and Elle share an enthusiasm, a warm voice, gleaming eyes, a peaches and cream appearance and an infectious joy that wins the audience over from her first entrance.

Andrews is hardly alone in shining like a box of holiday ornaments. Jeanine Gangloff Levy was the most wonderfully outrageous lead in Slow Burn’s spoofy Disaster! Here she has a field day as the lovelorn blue collar salon owner and dispenser of wisdom Paulette, who has some belt to the back of house numbers – and the most horrible bouffy hairstyle ever seen in a salon.

Michael Focas is the solid law school aide and slowly evolving love interest; Matthew Korinko, co-founder of the Slow Burn and one it’s most reliable actors, is the nasty professor; Landon Summers, Phoebus in Slow Burn’s Hunchback, is the shallow GQ-aspiring one percenter boyfriend; Leah Sessa spends time in the dance ensemble in a wig, but then emerges as the exercise guru on trial; Clay Cartland also spends time in the ensemble but quadruples in other roles including the muscular pin-up UPS guy whom Paulette falls for, and Kimmi Johnson, who wowed crowds a few weeks ago in Freaky Friday, is the dismissive uber-yuppie student Vivienne Kensington.

Butters Spulock makes a brief cameo in a handbag as Elle’s companion Bruiser and Mimi Ismailoff, who was very reluctant to appear on stage opening night, was Paulette’s hangdog Rufus.

Technically, the show benefits by renting the roll-on and roll-off scenery from the Music Theatre of Wichita. As always, Rick Pena’s costumes are pitch perfect. The lighting by Thomas Shorrock was adequate, although sometimes people were not lit when they were part of the scene, and some of the light cues were noticeably late on opening night. It’s hard to say about the sound. Some people had no trouble, but sitting on the aisle in the third row, about a quarter of the witty lyrics were unintelligible when more than one person was singing. Therefore, it helps to have watched the movie and know what is going on.

Legally Blonde presented by Slow Burn Theatre Company through Dec. 30 at the Amaturo Theater, Broward Center For The Performing Arts, 201 SW 5th Ave., Fort Lauderdale. Performances are Thursday through Saturday at 7:30 p.m., Wednesday the 19th at 1 p.m. and Sunday at 2 p.m. Running time 2 hours 25 minutes including one intermission. Tickets are $47-$60. Call (954) 462-0222 for tickets, at www.browardcenter.org or #Ticketmaster.com; in person at Ticketmaster outlets or the Broward Center’s Auto Nation Box Office. Info at www.slowburntheatre.org

Greenway See the Difference Commercial- Check it Out!

She Shorts a Hit!